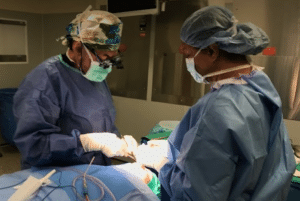 BBL or Brazilian Butt Lift is the layman’s term for fat transfer from an area of the body with an abundance of fat to the buttocks. Celebrities made this procedure popular, which is a profoundly oversized buttock, within the past 20 years or so. It is the transfer of fat from one’s own body to the breasts and face. The intent is to improve volume strategically in these areas where there is volume deficiency.

The addition of volume in the form of fat to these areas can produce a much more pleasing and aesthetic look. As humans, we have a very clear and definitive idea of what is aesthetically pleasing on our bodies. Globally, billions of dollars are spent annually to improve our appearance. As plastic surgeons we commit to providing the service – – but in its most safe fashion.

The removal of fat from more abundant areas of our body is not new. It dates back to the mid-19th century
when surgeons, trying to offer additional services to their clients and patients, attempted to remove fat and place it elsewhere.
It fell out of favor because the majority of the fat disappears. As scientific methods, and knowledge of tissue survival improved. Its back return was heralded by the ability to remove fat from areas where it was unwanted in order to create a more pleasing appearance. Subsequently, the transfer of this tissue returned.
Buttocks, breasts and some areas of the face have all been the recipient of that transfer to improve appearance. However, all areas are limited in how much fullness can be achieved –– and how long the fat can reliably last.

The buttock contains skin, subcutaneous tissue, muscle, and fat. The bony component of the buttock serves as the structural support for all of the softer tissues that make it up. A Brazilian butt lift or the addition of fat to the buttock area will create a fuller round her buttock. Sitting for meals, sitting for sporting events, sitting for concerts, and sitting for symphonies  – all represent various beneficial functions of the buttock as they assist in our sitting process. BBL will, however, change the sitting component of one’s life.
You can use your imagination for all types of other sitting activities. In other words, what’s popular in the past may significantly change in the future. Probably the most desirable function of the buttock – at least for women is its appearance. At least this is what seems to be true on the plastic surgeon’s clientele. The appearance of the buttocks has gone through phases.
At one point culturally it was desirable to have it fairly flat and not too obvious. As with many things celebrities draw attention and in this case attention to the buttock changed the marketplace. The appearance of the buttocks in Jane’s, dresses, bathing suits  – will determine to a great degree what a woman will wear. If a woman does not feel her buttock is a great asset then she most likely will try to conceal it with loose-fitting clothing.
Women who feel their buttocks are attractive are more likely to wear clothing that accentuates this anatomic area.

COULD BE THE KISS OF DEATH..

Although the Brazilian butt lift is highly desirable, this procedure, which is fat transfer to the buttock, caused 30 deaths in the past several years. Even though the methods in the science for this procedure have improved, deaths have still occurred. Most of these patients were healthy preoperatively and good candidates for outpatient cosmetic surgery. Most of them died from fat clots to the heart or lungs.
Therefore the American Society of aesthetic plastic surgery – has initiated a study group recommending that this procedure may be a higher risk than acceptable  – and is made specific recommendations on how to alter the procedure to reduce risks.
I prefer silicone implants for Brazilian butt lift or buttock augmentation because they’re more reliable and in my opinion safer.
When it comes to your health and safety – – quality is not negotiable – – it must be at its highest level.
THOMAS P. TREVISANI MD

This site uses Akismet to reduce spam. Learn how your comment data is processed.

At celebrities choice cosmetic surgery we offer you a very unique experience. Plastic surgery has become almost an essential part of our lives for some. Living longer, living better and looking our best has become an essential component of modern times. When you have made a choice to be your best in all things that you do you become a celebrity in your own life. Here- at Celebrities Choice- we urge you to make that choice—to be your best. We honor ,embrace and celebrate that. When you step through our door you embark on a very unique journey.